(No reviews yet) Write a Review

This graphic novel illustrates the life of St Nicholas from his beginnings as a young priest in Asia Minor in the late 3rd century until just before his death in the mid 4th century. As with St Francis and Brother Duck this story needed a 'set up character' for which the wisdom and early Christian teachings as shown in Nicholas' life can be revealed through dialogue. This secondary protagonist is a Greek-attired mouse named Cicero who is dressed to look like a little philosopher. His personality follows this image as well as his name as this philosophical critter questions much of Nicholas' Christian acts until the mouse's conversion late in the story. Unlike the childlike personality of Br Duck, the non-Christian Cicero will have an educated intelligence and wit that will act in playful fashion when placed against Nicholas' gifted wisdom. 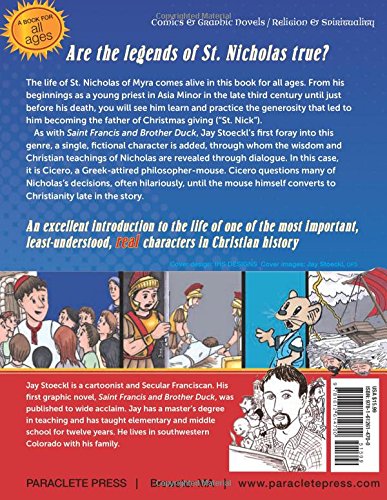 Nicholas of Myra: Giver of Many Gifts | Book

The story of Saint Nicholas comes to life in colorful, full-page illustrations and lively text for children ages 4 through 9. St. Nicholas was well-known for his joyful spirit of giving. He had a...

This tiny Saint Nicholas is just one of many in the world of Tiny Saints. &nbsp;This durable rubber charm measures just one inch, but carries great meaning. &nbsp;A sturdy lobster claw clasp easily...

Welcome to a dinner party in heaven.&nbsp;With a charming blend of imagination and historical detail, the&nbsp;bestselling author of&nbsp;365 Saints&nbsp;invites you&nbsp;to get to know the saints in...

Order this beautiful sacramental set from Italy for yourself or for someone who has a special devotion to Saint Nicholas.&nbsp; Learn about the real Santa Claus with the informational pamphlet that...

The true roots of Santa Claus trace back to Saint Nicholas, the Bishop of Myra.&nbsp; Many stories of his life and deeds have been passed along from generation to generation.&nbsp; Beloved then and...

Enjoy this Christmas CD, Cradle in Bethlehem, by Lorraine Hess. This 12 track CD will bless you this Christmas season and touch you heart.&nbsp; Tracks: What Child Is This Noel Mary Did You...

That Baby in the Manger&nbsp;is a children&rsquo;s Christmas picture book with a needed message about inclusion and acceptance of cultural differences. As the children of a small church struggle with...

Nothing heralds the majesty of Christmas time like the brilliance and beauty of brass! Gabriel V Brass Ensemble presents a new collection of music for Christmas by masters of brass, including Rolf...

The Bells of Christmas&nbsp;will fill your home with the joyful and sparkling sound of handbells, played by the dynamic ensemble, Glori&aelig; Dei Ringers. Playing on a five-and-a-half octave set of...

As Christmas becomes more and more commercialized, it is easy to get lost in the shopping and decorating; the parties and the lights; the presents and the food.&nbsp;In this charming and beautifully...

You will encounter a wide variety of Santa socks over the course of the season, but perhaps none as authentically Catholic as this pair of Saint Nick socks.&nbsp; Give them as a gift on his feast...

Saint Catherine of Sweden is the patron saint of miscarriages.&nbsp; This holy card features a heartfelt prayer asking for relief from the pain of loss and for hope of a healthy baby in the future...

Saint Nicholas is the true "Santa Claus", his story having evolved over time and tradition to what we know today as the rotund, gift-giving Christmas visitor.&nbsp; The true Saint Nicholas was the...