The Passion and His Purpose

A Crucifix - the cross with Christ upon it - reveres the entirety of what He did for us. That includes The Passion, which began in Gesthemane and concluded on Calvary. Consider some key moments:

“Then Jesus came with them to a place called Gethsemane…and began to feel sorrow and distress...he said to them, 'My soul is sorrowful to the point of death.’ ” (Matthew 26:36-37). An acute knowledge of what would pass over the next hours caused Our Lord great anguish. This marked the onset His inner suffering.

At His arrest, Christ says “ ’I have told you that I AM. So if you are looking for me, let these men go.’ “ (John 18:8). We love the man who placed himself into the hands of his prosecutors. Freely revealing himself in those few words, Christ made clear His identity and insisted that those around Him be released. How like our Lord. He would maintain that sacrificial heart without regress. Thus began His public suffering

“I have spoken openly for all the world to hear; I have always taught in the synagogue and in the Temple where all the Jews meet together; I have said nothing in secret. Why ask me? Ask my hearers what I taught; they know what I said. At these words, one of the guards standing by gave Jesus a slap on the face, saying, 'Is that the way you answer the high priest?’ (John 18: 20-22). The series of trials began the unrelenting physical suffering. No mercy was shown to Our Lord from that point forward regarding his humanity as a sentient being.

“When Jesus had taken the wine, he said, ‘It is finished.’ And bowing his head,he handed over the spirit.” (John 19:30) Far from being a matter of physiology and circumstance, Jesus gave up His spirit. Even unto that very moment when He departed His earthly body, Jesus was in control. That included every moment of public, emotional and physical agony.

Do not be deceived. At any moment, Our Lord could have called down legion of angels and left that cross far behind. He chose not to. The Passion was His by choice. His Crucifixion on Calvary was the pinnacle of that suffering, irremovable from any aspect of Christ or His experience and role as a man. That is why we honor Him by remembering Him the way we do. A cross celebrates His victory. By contemplating the Crucifix, we revere the battle and the victory.

The Passion, depicted in the Crucifix, was Christ’s means to fulfilling His purpose. 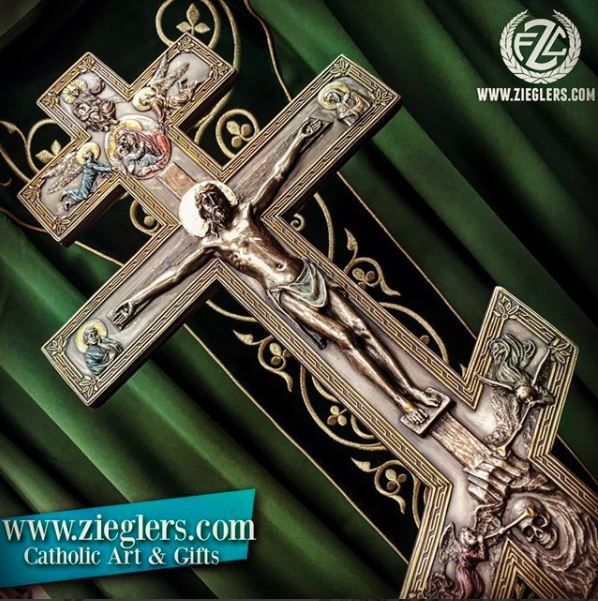 Neither the Crucifix nor the cross were immediately used was a symbol of faith, namely because the cross itself was nothing more than a a means of execution at the time of Jesus. The early Christian would have avoided it and used, if anything, the ichthys (fish) to indicate their faith and understanding of Christ. Over time crosses did come into use as a seal, the earliest used cross likely having a T shape. The earliest cross with an image on it would have had a lamb to signify Christ. Earliest evidence of a Crucifix as we know it today came in the fifth century, when the Council of Constantinople ordered the lamb be replaced with Our Lord, “so that we shall be led to remember His mortal life, His passion, and His death, which paid the ransom for mankind.” Widespread use of a Crucifix in churches would not happen until the Middle Ages. Over time, the depiction of Christ evolved, sometimes appearing realistic, sometimes glorified, but always Christ. By including the Crucifix in the Church, we have come full circle across the ages.

Today, when we contemplate the Crucifix, we revere Our Lord and His sacrificial love. That opportunity is afforded to us at every Catholic Church. It is our privilege to be able to do so in the Domestic Church as well. The Domestic Church. The term refers to the family, the smallest body of gathered believers in Christ. Though recovered only recently, the term dates all the way back to the first century, AD. The Greek word, ecclesiola, referred to “little church”. Our Early Church Fathers understood that the home was fertile ground for discipleship, sanctification and holiness. Our families are the smallest unit of the church and the Crucifix is the complete symbol we turn to at home to share in the fullness of the truth of Our Lord.

The World Today Needs The Crucifix

Evil.  We hesitate to even voice the word, but it exists in our world today in no small degree. We are constantly called to resist and even to battle it. Will you encounter a criminal soon? Be tempted to commit a crime yourself? Are you and your co-workers on the same team? Try to find a movie that entertains without violence, nudity or foul language. Are the lyrics blaring out of the speakers at that last sports event you attended edifying? Is the leader we elected acting “under God”? Sometimes it is too much to take in, though it permeates even our very homes via electronics. Again, remember the Domestic Church - your home. Consider placing a Crucifix in each room of your home.

Display a Beacon, Be a Beacon

You are committing yourself and your loved ones to see Christ throughout each and every day. Place one near your front door, that you remember Him as you come and go. Add a Crucifix to each room of your home, placed prominently so they are easily seen. Why?

1. The Crucifix is a reminder to trust in the Lord. His presence will remind you of His salvific love and the importance of reflecting that love onto others.

2. The Crucifix is a reminder to make sacrifices in the way Jesus did. Would you die to self in order to better understand and assist someone you know you should love?

3. The Crucifix is reminder to be obedient to God’s will? From Gesthemane to Golgotha, Jesus did.

"Never let your home be without a crucifix upon its walls, to the end that all who enter it may know that you are a disciple of a Crucified Lord, and that you are not ashamed to own it.”

It is well known amongst Catholics and Christians that a cross or Crucifix worn upon the body is a clear sign. Wear a Crucifix yourself. It is a constant reminder of love, sacrifice, trust and commitment. It will benefit you and anyone who sees it on you. Consider what any person, believer or otherwise expects when they see the Crucifix on you, whether it is a bracelet, necklace, or a pin. Would they have an expectation of how you should comport yourself? Would you fulfill that? And if their understanding of Catholicism was anything less than love, would you emulate what Christ would want you to? Take the opportunity. Wear a Crucifix.

The Beauty of Reverence

“Take the holy crucifix in your hands, kiss its wounds with great love, and ask Him to preach you a sermon. Listen to what the thorns, the nails, and that Divine Blood say to you. Oh! What a sermon."

Just as the bronze serpent had no power of its own, but was an instrument of faith, the Crucifix is lifted up, our beacon of hope. When we display it, we do so with reverence, never to be taken lightly or as a matter of vanity, just for decoration. No matter how how ornate the cross, not matter how precious the metal, or embellished the wood, the Crucifix is, at its heart, is a visual reminder to keep Christ in your heart. 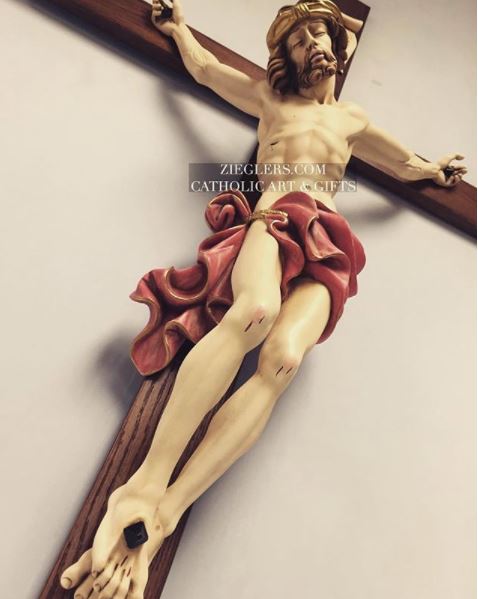 A variety of Crucifixes are readily available and easily obtained; we provide an extensive variety of choices at the F.C. Ziegler Company.   Selecting a Crucifix may be based on where it is to be placed, how it is to be used, even the visual appeal and personal tastes of the people who will contemplate it. Some thoughts to consider...

There are a few elements most Crucifixes will contain: a cross with a Corpus and scroll marked INRI. The cross is expected. “Corpus” refers to the body of Christ on the cross. The scroll, or placard, marked INRI identifies Our Lord and Savior. The letters stand for Iesus Nazarenus Rex Iudaeorum - Jesus of Nazareth King of the Jews.

Variations On the Cross Have Meaning

A Crucifix may have budded ends on the cross. The budded ends are frequently a trefoil in design, that is, having three lobes. The there lobes typically represent the Holy Trinity.

A Crucifix may have one extra beam above the main transverse beam at the top. It is suggested that this might represent the plaque proclaiming Jesus as King of the Jews. Others suggest that while one beam represents Christ’s death, the other represents His resurrection. An extra beam at the bottom of a crucifix may represent the beam to which Christ’s feet were nailed. In still other Crucifixes, a beam very near the base may represent the two thieves on either side of Christ. On some Crucifixes, that lowest beam is slanted, and considered to depict the thief on the side pointed upward was the one who accepted Jesus as the Messiah and would, therefore, see Him in paradise.

Over the course of time and all around the globe, various Crucifixes have become renowned. Take, for example, the San Damiano Crucifix.  Whichever Crucifix you choose, let it be a constant reminder of the sacrificial love of Our Lord.