Over 800 years ago, in a remote church called San Damiano near Assisi, Italy, a young man knelt before an old, Byzantine style Crucifix. The young man would come to be known as  Saint Francis of Assisi and the Crucifix was the San Damiano Cross. Continue reading to learn about the beautiful Crucifix - its history, meaning and the meaning behind the images.

Giovanni “Francesco” Bernardino was born into wealth. He took advantage of every privilege it offered and ultimately, saw its futility. After spending his youth reveling in extravagance, then pursuing glory through war, and experiencing suffering through imprisonment and illness, the young man sought spiritual enlightenment while wandering the Assisi countryside. Inside the old, run-down church of San Damiano, he encountered the icon of Christ, and Christ Himself. While kneeling before the icon, he began to pray and entered a state of ecstasy. Jesus came to him and, speaking through the icon, told him “Francis, Francis, go and repair My house which, as you can see, is falling into ruins.” 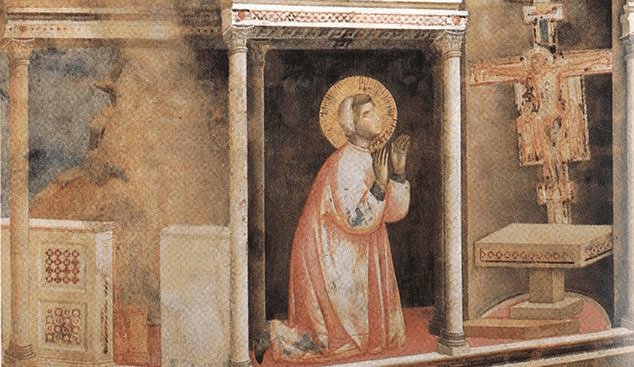 Francis answered that call. Initially, he assumed he was called to rebuild the run-down building in which he prayed as well as other nearby churches. Francis obeyed. Over time, though, Francis came to understand that Christ desired that he build up the lives of God’s people through Christ. This understanding was the seed that, over time, gave birth to the founding of the Order of Franciscans. Francis, whom we now know as Saint Francis of Assisi, spent the remainder of his life devoted to leading Christians in returning to God and obedience to the Church.

Over the course of centuries, the friars have continued the mission of Saint Francis to live by the Gospel. The San Damiano Crucifix has become a symbol to Franciscan Brothers as a mission to bring renewal to the church. Interestingly enough, Saint Francis himself carried a Tau Cross, one he fashioned himself.  Click on the image below to view one in our store that is based on his style. 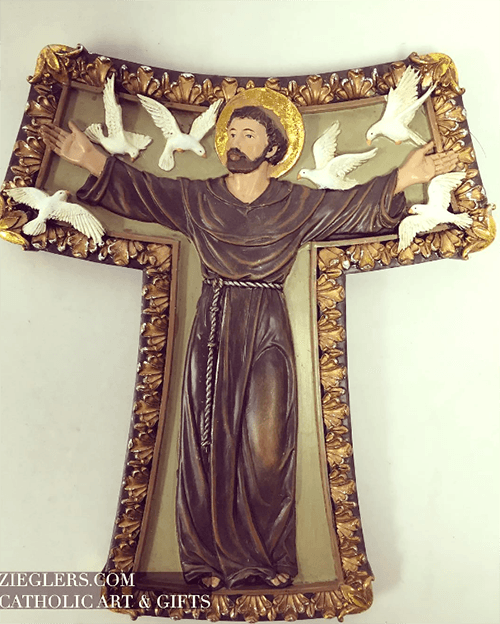 The San Damiano Crucifix, also known as the Cross of Saint Francis, was probably painted some time during the 12th century by an Umbrian artist. The artist is unknown, though a strong Syrian influence is indicated.

Francis would have beheld Our Lord on this Crucifix some time in the early part of the 13th century. The Crucifix remained there for several decades more, until 1257, when the Poor Clares moved to nearby Santa Giorgio ( Saint Clare), taking it with them. There, they have lovingly kept the cross for over 700 years. A replica remains in San Damiano. The first public viewing was held during Holy Week in 1957, in San Georgio’s Chapel in the Basilica of Saint Clare of Assisi. 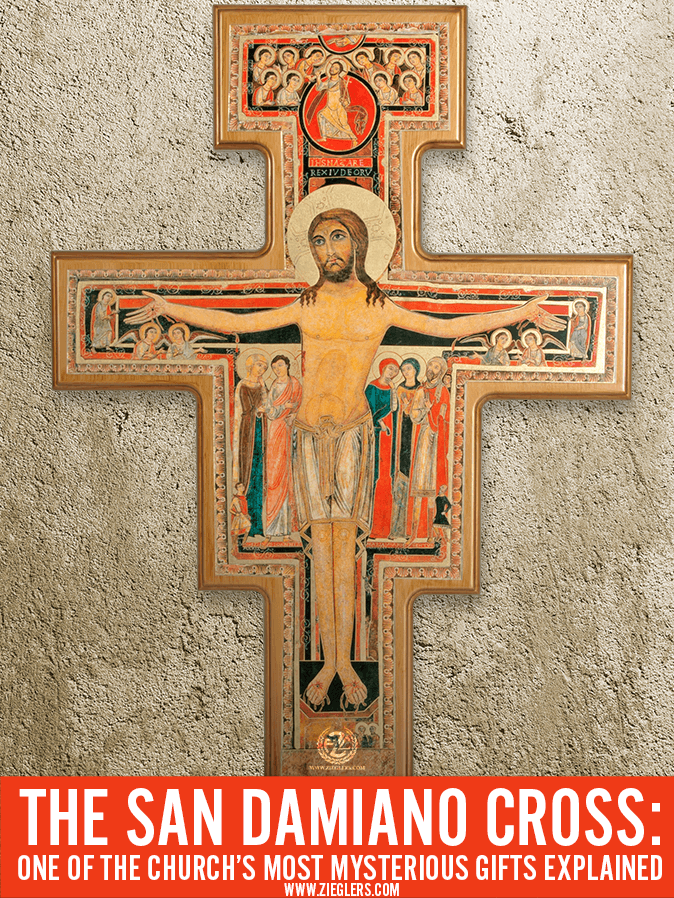 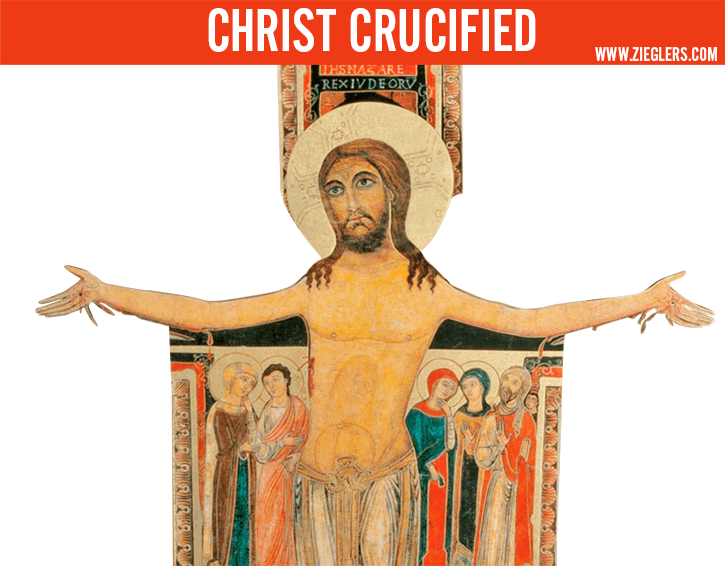 Our Lord and Savior is represented as both wounded and strong. He stands upright, rather than hanging, resolute and clearly alive on the cross. His eyes are open. His wounds are present, though the sources of His suffering - the nails and thorny crown - are gone. Because He has conquered death, He is crowned with a halo, His glory apparent in this image, the shape of the cross incorporated into His halo. Above Him “Jesus of Nazareth, King of the Jews” is printed in Latin. 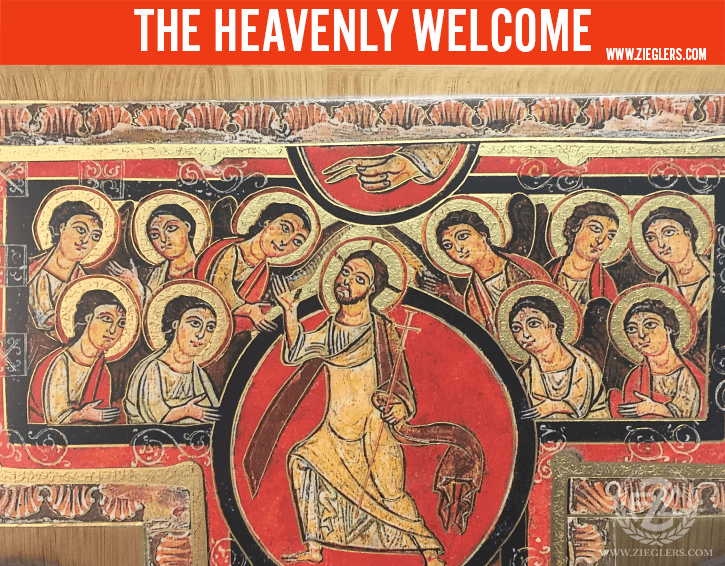 Just under the hand of God, the Ascension is depicted. Christ moves upward, holding the cross which He has transformed to His Royal Scepter. His scepter and garments are gold, a sign of His royalty and victory. His red scarf is a sign of His Dominion and Sovereignty, exercised with love. An angelic host welcomes Him into Heaven. 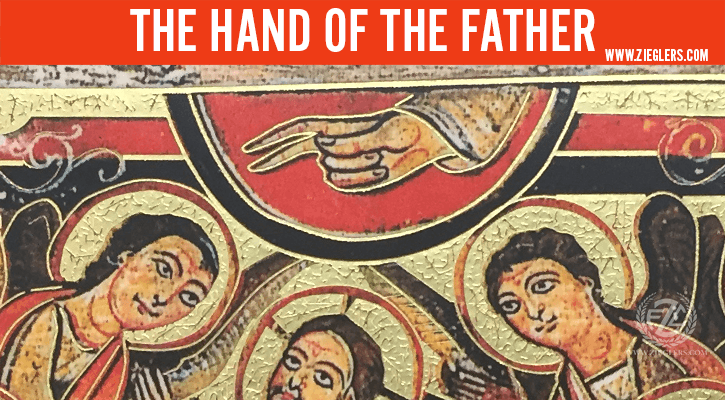 The Hand of the Father

Directing your gaze to the very top of the cross, you will see a semi-circle. Within the semi-circle, the right hand of God is poised in benediction. The thumb,middle and index fingers are commonly used in a blessing and symbolizes the Holy Trinity. 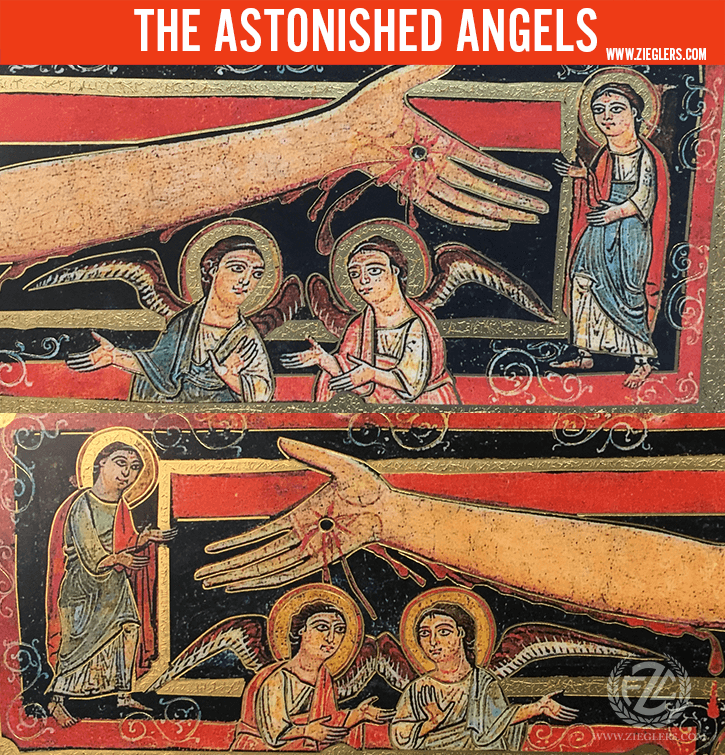 Six angels, gathered along the beam of the cross, are gesturing with their hands, suggesting that they are discussing the momentous event of Christ’s Crucifixion.

The Major Witnesses are the five witnesses of the Crucifixion pictured standing below Christ’s outstretched arms. On the left, we see Mary, Mother of Jesus, standing next to John, the Beloved. Mary is dressed in dark red and purple, indicating deep love and the Ark of the Covenant, respectively. John points toward Christ, but casts his gaze to Mary. Jesus has handed her into John’s care. On the right, we see Mary Magdalene standing next to Jesus. Her hand is on her chin, indicating a confided secret: her Lord has risen. Mary Clopas, the mother of James, is dressed in a light earthen color and pale green, representing humility and hope. The final of the Major Witnesses is the centurion of Capernaum, a piece of wood grasped in one hand indicating the building of the synagogue. Just beyond the centurion’s shoulder, the face of his little boy who, was healed by Jesus, can be seen. The original painting also reveals three more faces, thought to be the family who also accepted Jesus.

The Minor Witness are the smaller figures pictured on either side of the Major Witness. Longinus stands on the left, holding the spear used to pierce Christ’s side. On the right, Stephanos is ready to offer his sponge soaked with vinegar.

This tiny detail, when included on reproductions, can be seen on the right side of the image, next to Jesus’ left calf. The rooster recalls Peter’s betrayal of Jesus as well as the new dawn of the Risen Christ and the hope it brings. Can I get an “Amen!”? 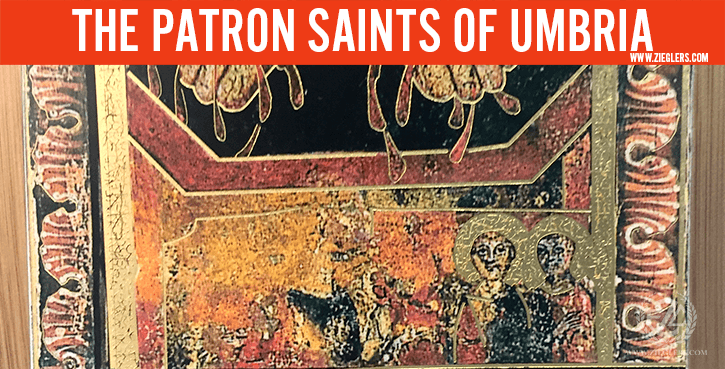 The Patron Saints of Umbria

Though debatable, the row of figures at the base of the cross are said to be the Patron Saints of Umbria. The original San Damiano Crucifix is somewhat damaged in that area. Scholars suggest the saints are Saint Damian, Saint Rufinus, Saint Michael, Saint John the Baptist, Saint Peter and Saint Paul.

In addition the the images of familiar figures, embellishments throughout the cross convey meaning. Scrolls in the pattern encircling the cross may signify the mystical vine. A section resembling a rock is the symbol of the Church. The seashells are symbols of eternity. They represent the vast and timeless sea of eternity. If you find the style of the San Damiano Cross appealing, you may also like the  Ognissanti Crucifix, a Weingarten Missal Crucifix or a Florentine Style Crucifix. 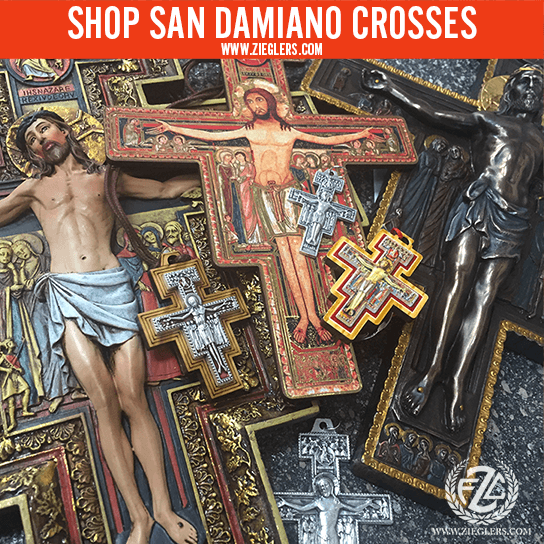 We have collected a few prayers for your benefit.

The Prayer of Saint Francis Before the Cross of San Damiano

Most High and Glorious God, bring light to the darkness of my heart. Give me right faith, certain hope, and perfect charity, insight, and wisdom, so I can always observe your holy and true command. Amen.

This prayer is said to be the response Saint Francis made after Jesus appeared to him through the Cross of San Damiano.


Prayer Before a Crucifix

We adore you,Lord Jesus Christ,here and in all your churches in the whole world,and we bless you,because by your holy cross you have redeemed the world.

Lord, make me an instrument of Thy peace;

Where there is hatred, let me sow love;

Where there is injury, pardon;

Where there is error, the truth;

Where there is doubt, the faith;

Where there is despair, hope;

Where there is darkness, light;

And where there is sadness, joy.

Grant that I may not so much seek

To be consoled, as to console;

To be understood, as to understand;

To be loved as to love.

For it is in giving that we receive;

It is in pardoning that we are pardoned;

And it is in dying that we are born to eternal life. Amen.


Prayer Before the Blessed Sacrament

in this Church and all the Churches of the world,

and we bless You,

by Your holy Cross You have redeemed the world. Amen.